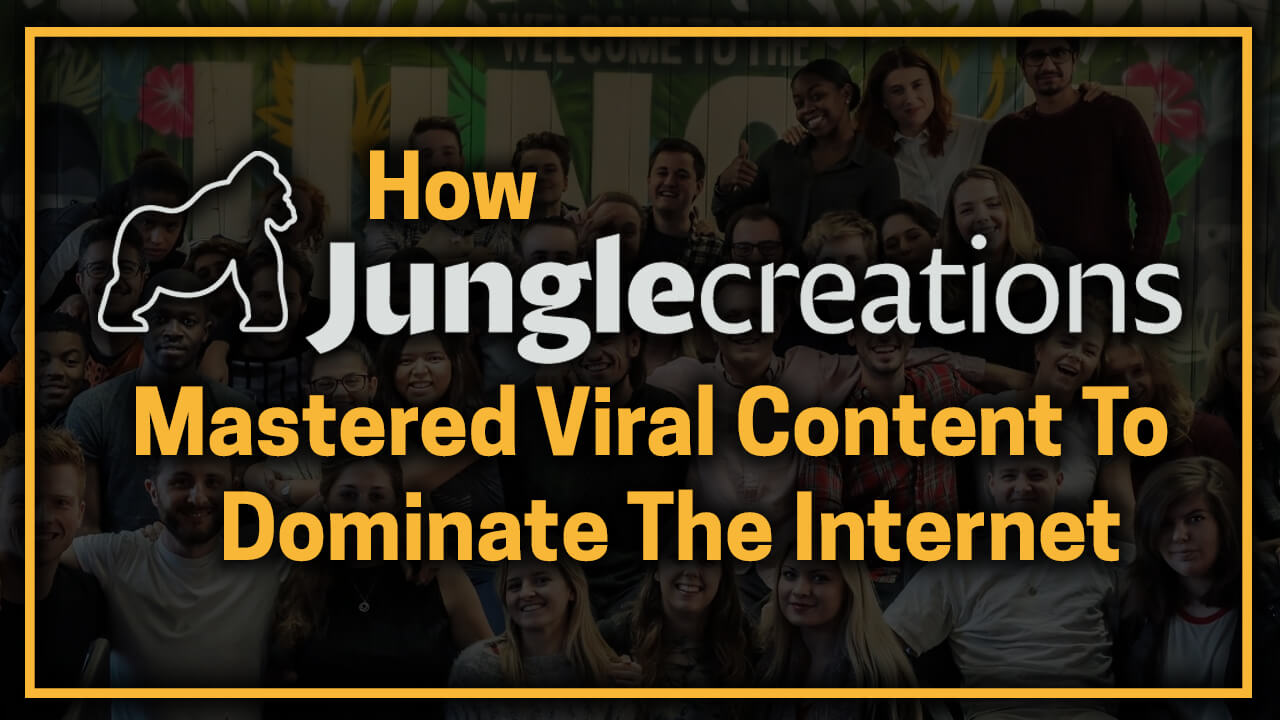 Jungle Creations is one of the most powerful and influential online media companies today with over Three Billion monthly views and more than Seventy Five Million channel followers.

Last week I was fortunate enough to sit down with Founder and CEO, Jamie Bolding to find out the secret sauce to Jungle Creations’ success and discuss the crucial principles brands need to focus on to be successful in the future.

Jamie started out with a discount website for students and tried to drive traffic using physical fliers and lanyards.

Through this he started setting up a series of Facebook pages including ‘Wallpark’ which were centred around getting the attention of students and aggregating traffic to various offers.

After Uni, Jamie set up Viral Thread (now VT) which followed a similar concept taking advantage of Facebook’s focus and drive behind video at the time.

It took six months before VT had any viral success.

VT then grew into one of the biggest pages on Facebook inside 12 months.
At this point Jamie started building multiple niche interest pages to build new communities which eventually grew into Jungle Creations.

The Facebook algorithm is fuelled by how people respond to your content, however it does have its own agenda. If they left it entirely upto the users they could risk it just becoming a meme factory.

You have to have really strong organic content in order to compete with paid ads. You can’t just throw money at low-engagement content and get results as the prices will be too high.   The algorithm of Facebook and all other social platforms is constantly changing and evolving but there are black and white rules of virality which will always apply.

Jungle’s content forms the ‘top-of-funnel’ element of the advertising focusing on branding and exposing new products and services. Only later do they follow up with direct CTA direct response adverts based on people who’ve engaged and watched over 50% of the content.

Longer form content is very valuable. The more of a video someone watches, the more invested they are into the promoted brand.

On the progression of social media and where brands should focus their attention: Brands need to become publishers. Utilising their own brand to produce and distribute high quality, interesting content.

“People don’t dis-like being advertised to, they dis-like shit content.”

Nike delivers aspirational stories in the form of content marketing, which turns Nike into an aspirational brand that people want to buy into.

The most effective way to influence with content is to evoke emotion.

The biggest mistake people make with content is making it too confusing.

When people first see your video in their feed they’re starting from ‘square one’. There HAS to be some sort of hook at the start to capture attention and give a reason to keep watching. Then the narrative begins. Finally, a conclusion is presented that gives people a reason to share.

Facebook may be falling out of favour with people but it’s still the biggest platform in the world with the most people on it – therefore the most lucrative.

YouTube have monetisation methods in place such as ad breaks and pre-roll ads which publishers can use to monetise their content.

Interestingly, Jamie also uses the term ‘Viral By Design’ and he believes that all new products need to be created with a Viral By Design approach taking into consideration what it truly means to the end-user or customer.

The biggest brands of recent years, Uber, Facebook, Snapchat, Dropbox have all built their success on virality.

With D2C (direct to consumer) commerce you can ‘own the consumer’ – and if they believe in your story and brand they’ll be customers for life.

By ingraining the concepts of ‘Viral By Design’ into the root of the product and building it from the ground up with the right questions in mind, such as what does it mean to the consumer, you can drive your CPM lower than you could ever imagine and build a brand or business that’s a powerhouse.

From Jamie: “Everything in the future is going to be Viral By Design”
Businesses historically have been about solving problems for people.

Moving forward, the problems that need to be solved are less for people and more for the planet. As a result, people today want to be involved in being more ethical, sustainable and environmental. Businesses who have a mission around their brand have a tremendous advantage.

People as a collective are powerful. If they all buy into a good cause, something that is good for the plant, there’s a tremendous opportunity for entrepreneurs to capitalise on that and simultaniously drive that cause forward.

Social media provides transparency from brands. Therefore it’s crucial to leverage this rather than trying to work against it.

Big businesses and corporations are an essential part of sustaining a plant of 7 billion people. Jamie doesn’t believe they’re inherently evil but that operating at scale causes difficulties and compromises that often make things appear that way.

Being sustainability and being ethical is viral.

Jamie believes as a society we’ve reached the edge of “what can this do for me?” and we’re starting to see a social evolution to people placing importance on the broader issues.

Brand communities are way bigger than buying a product. It becomes a way of life.

Amazon is the perfect example of building a trust based community. Their proven track record means when they launch new products or features, their existing user base is already sold.

Even though the rules have changed and organic reach on social is much more restricted and its a much more pay-to-play market, the rules are still the same. Rather than getting a higher organic reach, it’s about getting a lower CPV (cost per view).

How Microsoft Get Millions Of People To Use Their Software

Making amazing software is one thing. But getting people to use it and fundamentally keeping them as clients and customers…

How Creativity Can Transform Your Life - Adam Roa

Creativity and personal development are two powerful things that can help your life. But how can creativity relate to the…